Interior design: what is the difference between classic and traditional style?

Comparing two styles of interior design such as classic and traditional means making a series of  clear distinctions concerning different levels of design, but that do not go past the aspects that the two styles share which are more than the dividing ones.

The difference between classic and traditional style is, in fact, mainly originating from the materials and "richness" of the two styles, but also from the predominance, regarding the latter,  of a more intense and lively chromatic research, a less neutral one.

These aspects are added to a desired for simplicity that dominates in the traditional style while the classic style loves pomposity.

In any case, since in this blog we repeatedly reviewed the peculiarities of the classic style in interior design, let's now review the characteristics of the traditional style, analyzing for each point the differences and the similarities between the two.

This is what we will be discussing in this article:

Let us look at each topic individually. 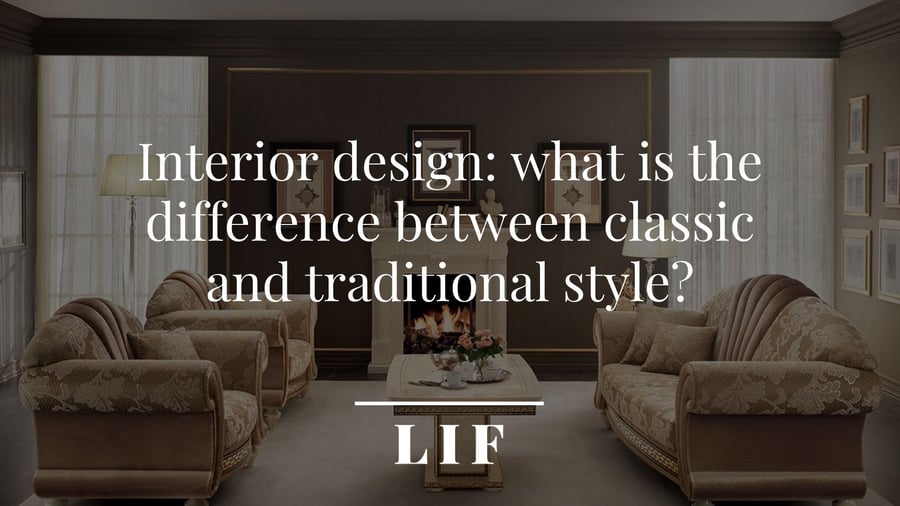 The difference between classic and traditional: a genesis that starts in the past

Traditional interior design has its roots in ancient times and in the Greek style first and the Roman style second, offering an elegance and warmth that appear simpler and more modern.

It is a very popular style, in the sense that it meets much appreciation and relies on the same theoretical basis of the classic one: order, symmetry, and proportion.

However, on the contrary of the classic furnishing style, it makes use of its ancient origins in a less "ostentatious" manner, thus offering an aesthetic idea that is less rigid respect to its rules and generally simplified (as well as economically more affordable, at least typically). 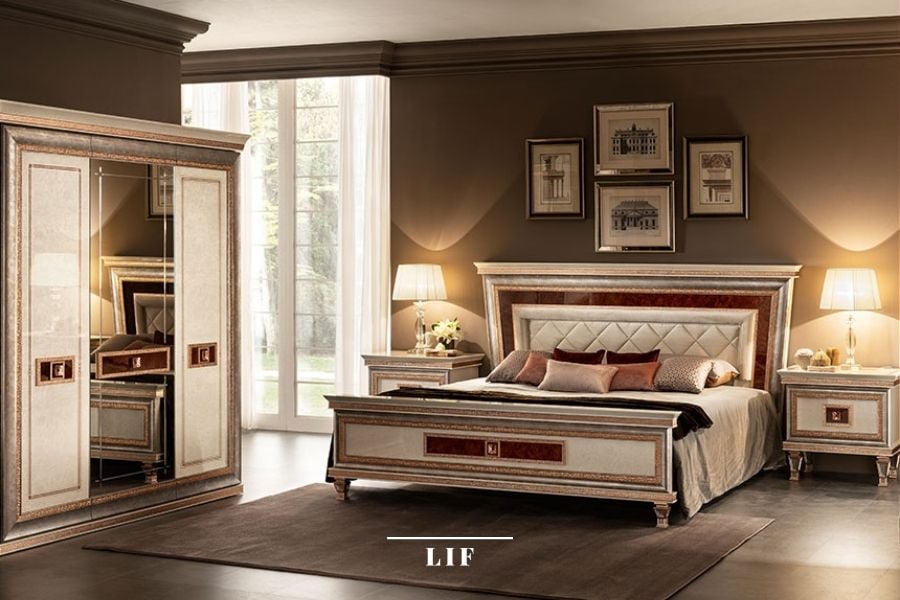 The most modern inspiration originates directly from the furnishing popular in Europe in the eighteenth and nineteenth centuries, from which it draws the timeless style so close to the classic, turning it into a warmer and more welcoming version, less noble, capable of highlighting more clearly the gap with what we could define as its "parent".

This relationship is evident not only at a theoretical level as explained above (that is, the criteria of balance, harmony and proportion), but above all at a formal and structural level.

While the most substantial difference is, as previously mentioned, the more severe and sumptuous elegance of the classic style.

Difference between classic and traditional style: from neutral shades to wider range of bright colors

Among the first aspects to take into consideration to define the difference between classic and traditional there is certainly the macro-structure concerning the color.

The choice of the color palette for a single room or the whole house is fundamental and should always reflect the characteristics of the style chosen in order to avoid excessively eclectic results.

In this discourse about the differences and similarities, color tends to present themselves in a very different way between traditional and classic interior design. 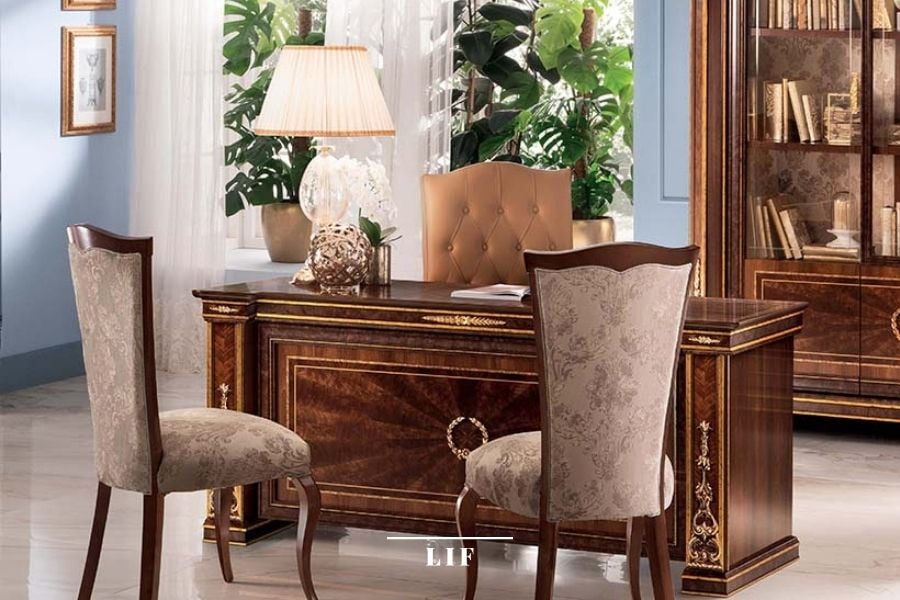 The latter, in fact, prefers a clear and soft chromaticism, basically neutral, designed to highlight the prestigious materials of the furniture and avoid evident contrasts (thus increasing also calm and familiarity).

In traditional furnishing, the range of hues is much wider and richer: even if it does not avoid neutral colors, it can range from red to green, from yellow to blue, searching for more lively and accented patterns.

We are not talking about an anarchy of color: it should not be forgotten that each element should be weighed in a proportionate and harmonious way with the overall environment, in the traditional as well as in the classic style. 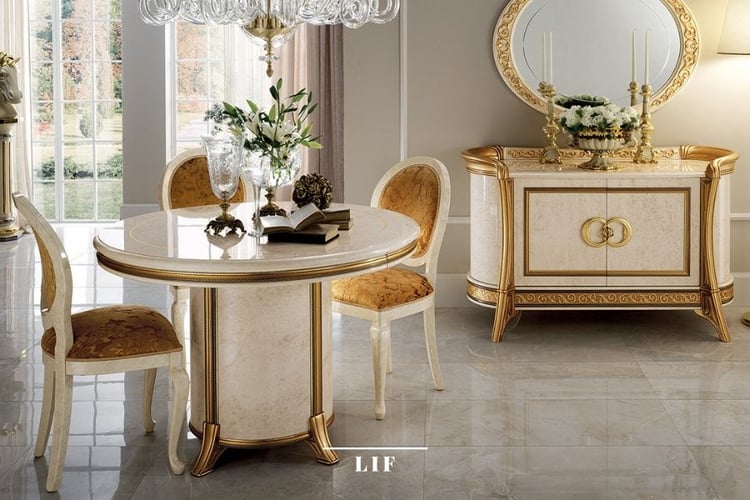 Furniture, details and finishes: the main differences between classical and traditional style

The classic style strongly focuses on the value and wealth of materials, finishes and decorations.

Each element of the room, placed in a context that must not forget the harmonious trend of the style itself, in addition to comply with a certain essential appearance (a balanced magnificence of sorts) shows off its elegance and refinement.

The classic style is extremely pure and with a strong identity.

The traditional style, on the other hand, uses, as already explained, lines and structures of the classic style but placing them into an environment that is "less rich" but equally elegant, simpler but able to offer a stronger feeling of familiarity with the environment (even if this tends to be a subjective factor).

For certain aspects, using a "formula" that is partly inaccurate and too simplistic, but useful for a better understanding of the difference between classic and traditional styles, it is as if the age of antiquity had been removed from a living room or a room in classic style, leaving just a vague hint of it. 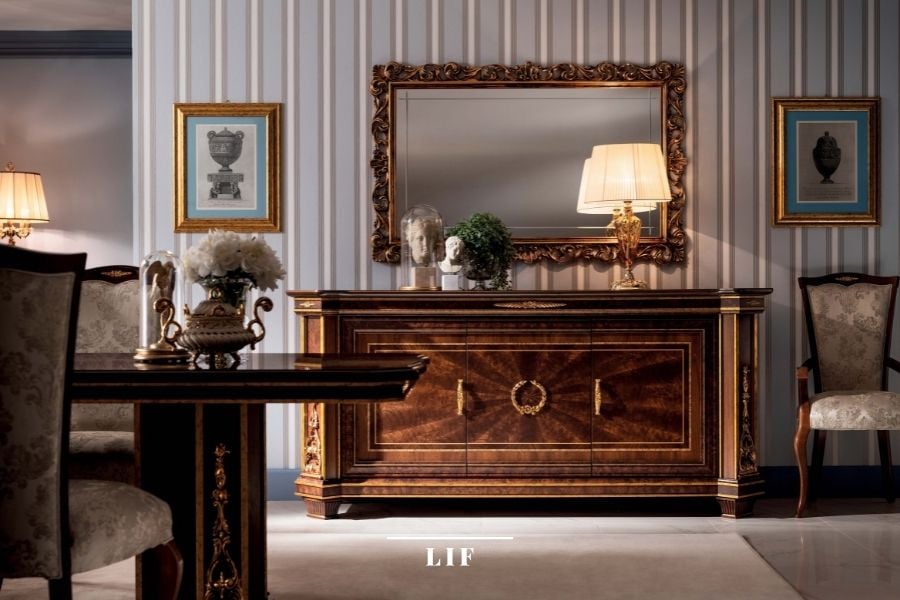 Classic and traditional style: the differences in lighting design

In terms of lighting, the difference between classic and traditional style is almost nothing: there are still discussions about the shared linearity and the difference in materials (that is why less sophisticated lamps and chandeliers will be present) and also discussion about its diffusion.

In both styles, in fact, the light sources tend to be organized, starting from the natural ones and to then move to the artificial ones, according to the criteria of balance and symmetry that characterizes both the classical and traditional environments.

For this reason, independently of the type of lighting source (table lamp, floor lamp, ceiling lamp, wall lamp, etc.), light diffusion in both styles should be uniform and proportionate, providing a feeling of elegance of the room and allowing the furniture to gain value according to its aesthetics and materials. 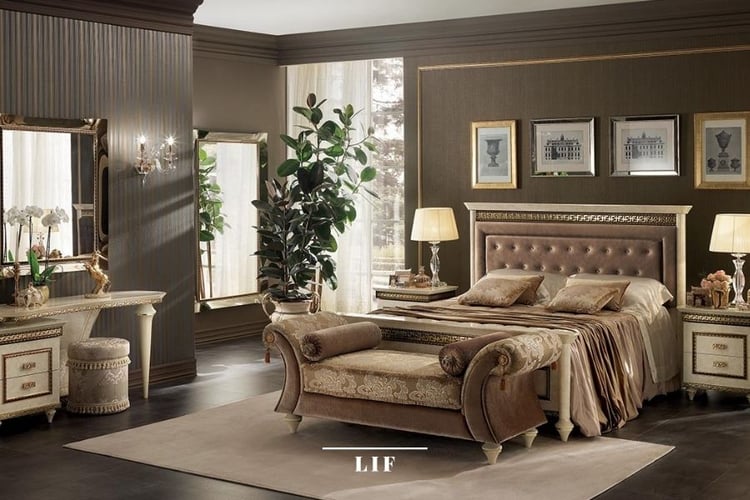 Classic or traditional style? Make your choice and furnish your home with elegance

We have shown you the substantial differences between these two furnishing styles. Now that you know the details and characteristics of each one, you can get a sense of the type of furniture you want in your home.

Choose Made in Italy furniture with unmistakable beauty and refinement and make every room in your home an authentic setting of value and style.

Are you thinking about decorating the interior of your rooms?